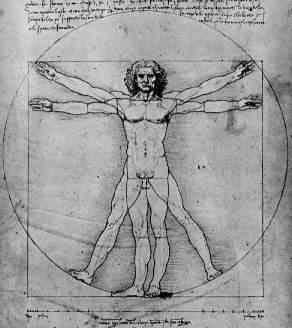 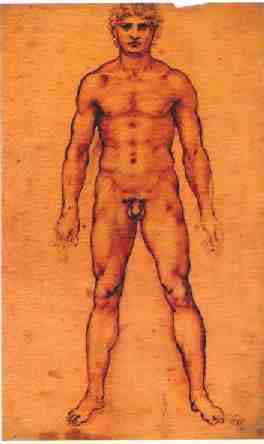 Again, in a few simple strokes, Leonardo indicates the corona,
the acroposthion - and the assymetrical testicles
A nude man standing facing the spectator
Leonardo da VinciProperty of Queen Elizabeth II One of the best known nude male images in the world. Michaelangelo's Adam is portrayed with a baby's penis - presumably to indicate his innocence. As such, this is quite accurate - a baby's foreskin may extend far beyond the end of his glans. (The closeup was taken after the recent restoration.) 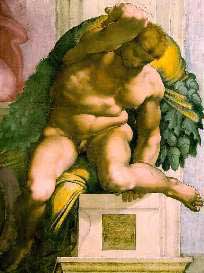 One of the enigmatic male nudes (ignudi) on the Sistine Chapel ceiling. He is portrayed with a small adult penis. 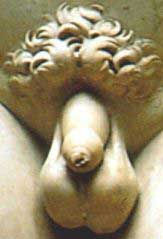 David's penis is relatively small, probably to avoid attracting attention, and following classical ideals. He is intact because: Michaelangelo preferred it his model was (of course) intact Michaelangelo had regard to the midrash (Men 43 6) that David "looked on himself in the bath and was distressed he had no evidence of a covenant fulfilled" and had himself (re-circumcised) (Encyclopedia Judaica) the ancient Israelite circumcision was minimal, and/or it isn't of the Biblical David at all.Some art historians believe that David was actually the name of the model who posed for the statue, and that Michelangelo claimed the Biblical reference to make it acceptable to the Christian world. 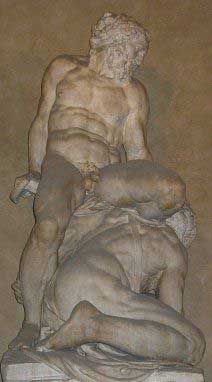 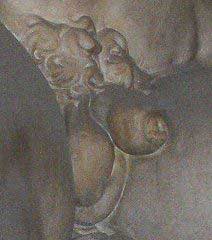 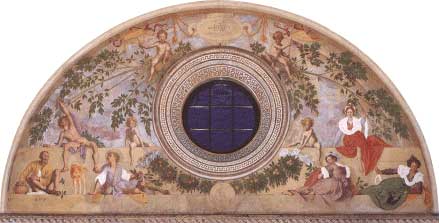 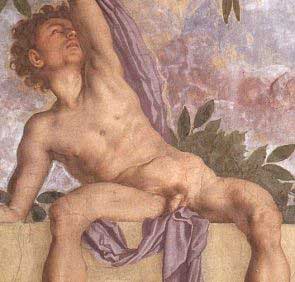 Allegory of  the Victory  of Honesty over Deceit
by Vincenzo Danti (1530-76)Boboli Gardens, Florence 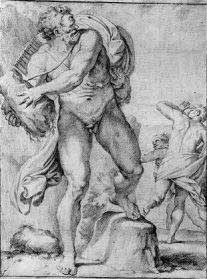 Polyphemus and Acis
The cyclops' penis is boyish after the classical manner, with a long foreskin... 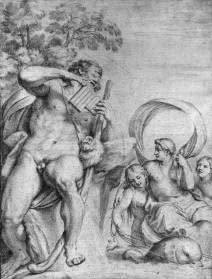