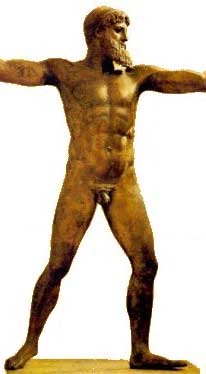 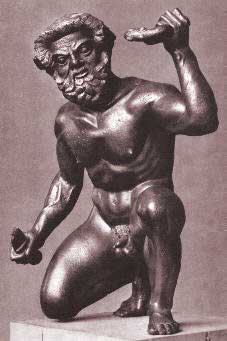 This bronze satyr killing a snake, 44 cm high and 2350 years old, is from the mysterious civilisation of Etruria in northwestern Italy. He originally supported a large vase. Unlike most satyrs, his penis is neither outsized nor erect.
Wittelsbacher Ausgleichfonds, Munich 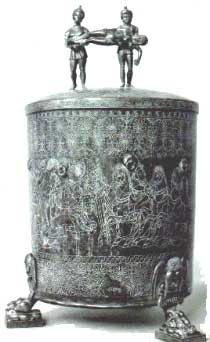 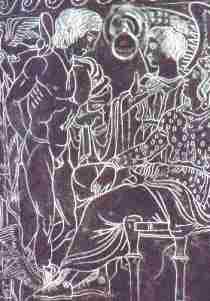 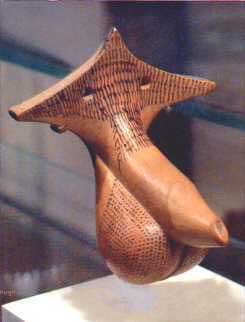 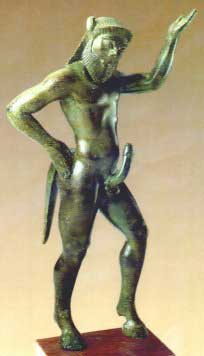 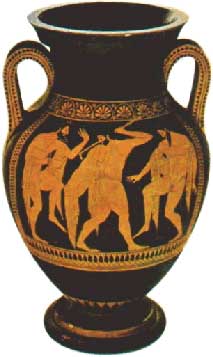 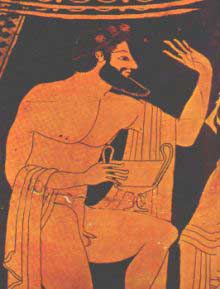 This amphora, painted by Euthymides, son of Polias, over
2500 years ago, was found in Vulci in Etruria.
Staatiche Antikensammlungen, Munich
Why so small?
"The artistic evidence implies that over-large genitals were considered aesthetically unpleasing by the Greeks and Romans. ...the ideal type of male beauty epitomised in classical sculpture, Greek and Roman, normally depicts genitals of somewhat less than average size...certainly never more. Consequently, the exaggerated genitals of Priapus made him seem an ugly and grotesque figure, though benevolent. "Sex or Symbol?Erotic Images of Greece and Rome"Catherine Johns

We should never assume that the Greeks, Romans and Etruscans considered images of penises as we do.
They used them on amulets to ward off the evil eye, with no more thought for sexuality than we consider crossed fingers to be a Christian symbol.
The faces of people on bowls are almost invariably in profile, but we do not suppose that full-face was considered "aesthetically displeasing".
So the small penises shown on ordinary mortals may have been no more than a convention, to distinguish them from fertility figures such as satyrs and Priapus - which were much more significant in an age when the fertility of plants, beasts and people could not be taken for granted or brought under human control by material means. 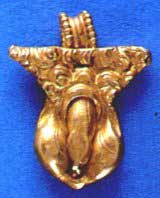 Why always covered?
The Greeks considered only the glans, not the whole penis, to be obscene. In the gymnasium, men kept their glanses out of sight by tying a thong (kynodesme) around their foreskins, and Hellenised Jews sought foreskin restoration to make that possible. The "red-tipped" phallus that the Chorus of The Clouds disdained would have belonged to a circumcised Egyptian (leather intact phalluses were part of the costume in all comedies, including The Clouds). The glans was only shown on purely phallic images, such as those used in religious festivals. On those, the artists showed wrinkling to indicate the foreskin. 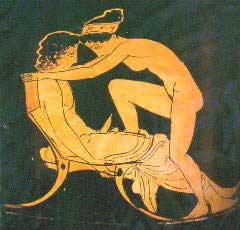